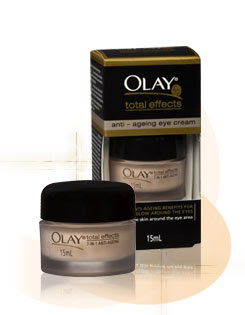 Last month I did a review on Total Care by Olay Total Effects. I still believe every word of that review. I really hope the company has stuck with its original formulation. A user will know if she is given a lower grade quality judging from the result.
With that said, I am still giving Olay a chance somehow to redeem itself, I am trying out their Anti-Ageing Eye Cream. It’s teeny weeny 15g container is as pricey as its Anti-Ageing Moisturizer counterpart. Not cheap, but if it works all right, then that would be immaterial.
With the number of hours I spend in front of my computer on a daily basis, I have seen it take its toll primarily around my eye area. My eyes started to look puffy and lines as fine as they may be have appeared out of nowhere. Instead of freaking out, I might as well do something about it and have got this bottle by chance. The sissy bought it by mistake instead of the moisturizer. I thought it best that I pay for it instead and try it out for myself.
I will do a review in a month or two. Watch out for it. 😀