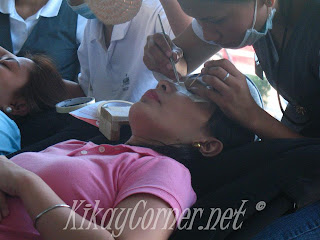 Guess what I’m getting done in this picture? I was in this position for a good hour and a half for my very first betty boop extension lashes.
In all my 32 years, it was actually only late last year when I got serious with foundations. It has always been just face powder, brows and lipstick and I was good to go. I have all the works but I rarely use them. It was also late last year that I considered getting eyelash extensions. As a wedding planner and coordinator, I have my share of suppliers in my box of contact people for anything about weddings. So I got down to asking one beauty expert after another. The best rate I got was 2,500. So I window shopped for a bit and I figured that he probably has got the best deal and I am pretty sure I won’t regret having mine done. He owns one of the most reputable salons that I know and very well known too, in the wedding coordination circle. I was thinking of getting mine done very soon in his salon- until I saw my good friend, Frances,when she came to visit my sister at the hospital last week. I cannot believe the rate that she got hers for. I did not waste time and got to the specialty salon, i-Lash the day after! It didn’t matter if I had whole day of marathon race at the island cove with 29 other bloggers. I was so thrilled that I got my lashes three times cheaper that I originally was planning to have.
I never had lash extensions done before so I really don’t have a point of comparison. But so far since the third day that I had it, it felt really natural. The first couple of days, I did have a red eye syndrome and I got it fixed on the second day. I was told that the medical grade glue’s fumes must have gotten inside my eyes or something. One thing for sure, whatever it was that their eye drops is made of, it did soothe my eyes big time. They applied some to my eyes immediately after the extensions were placed, but for some reason the red eye syndrome was persistent. They fixed the problem at no cost on the second day.
I love the fact that I do not need to curl my lashes and apply mascara. It does take sometime to do that, especially for those who have super fine lashes like I do. I deliberately not blogged about this right away because I wanted to see how long it was going to last. Today, my extensions are a week and two days old. They are not as perfect as I stepped off the salon, but they are still there. The first few days, I have had tired eyes syndrome. I’m not sure if this is uncommon to my case. I still have to check with friends who recently got their brand new lashes. 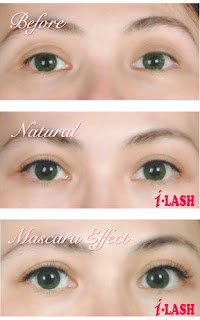 Are they worth it? I think so. I never felt more like a girl like when I first had the lashes woven to my own lashes. But more than that, I am more thrilled with the smile the hubs gives me every morning with my still sleepy eyes. I swear he is more protective of my new lashes than I am. You see, I have so gotten used to sleeping with a pillow on my face and that I can’t do anymore if I want to keep these lashes pretty and untangled. So that’s something you have to take note of if you’re getting these pretty lashes. 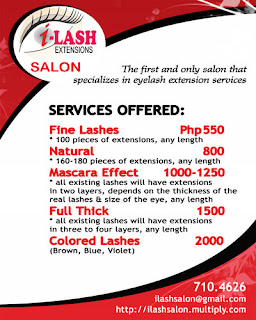