I blog about lifestyle and beauty and I am a klutz. A line that sounds a lot like one of those AA session introductions. The only difference is that, getting handed with one of those shiny medallion chips or sobriety coins for having made it a month from not tripping or getting a booboo, for me, is far fetched. To cut the long story short, let’s just say, I trip, hit my elbow or whatever on a daily basis. It is something I have kind of gotten used to and have grown to live with.

I have also noticed that my tripping incidents become so close together  when my hormones go berserk during my time of the month. PMS does this to me. Minor bruises, trip here and there are my usual route.

Because I would like to consider myself to be a reasonable person, I try to figure out why I klutz away through my daily grind. I surmise that it has a lot to do with my being an action person. Because I tend to follow through on what I think of doing, I oftentimes get ahead of myself and there goes the accidents I most often have to deal with. Ouch!

Nothing major as my shin skin scraping off that night in June 2011. It was crazy painful! But I am actually thankful enough that I was wearing PJs then. Else, I could have scraped myself to the bone! Yikes! And that was right inside our very own backyard.

Here’s much I can tell, for a moment there, I really felt like I saw stars and birds circling my head on impact. It happened during the time when the rain was pouring hard. So screaming for help wouldn’t have done me any good. It was also too owie to let out a scream! I struggled to get up and helped myself as I limped my way back to the house. It was crazy for me to go out and walk in the dark anyway. What was I thinking!

I am not surprised to find out that my accidents are not particularly limited to the four corners of the house. Apparently, a klutz is designed to have this innate ability to tumble, trip and tumble all over again regardless of my location – for as long as the pull of gravity is present. Above is an instagram post I uploaded April of last year when my family and I were in Vietnam. For lack of heart of posting a photo of my scraped knee right above the shin that was scraped just the year before, I just uploaded a photo of the solution we bought from a local Saigon drugstore. I was taking photos (as any tourist would) along 23/9 Park in District 1 of Ho Chi Minh, Vietnam, when I totally lost my balance for no reason. I don’t think anyone can be klutzier than that.

And with the hope that the odds of tripping in a foreign land might not be that high, I did not arm myself with any sort of first aid anything (so irresponsible- I know!). We were only visiting Vietnam and Cambodia for a little over a week, for one anyway. You see, even a klutz can hope. The sting from that Vietnamese Providone-Iodine solution I got hold of that day, made me promise to myself, that I will never assume or presume, let alone hope. Yes, the sting was pretty bad.

Now back to my shin scar, I can only honestly wish I used Contractubex from the time my scars gave some hint of healing. The first tube I bought was another brand – choosing between that and Contractubex, I chose the pricier one, with the thought that pricier translates to more effective. Contractubex was way affordable at around 300 pesos cheaper. See that darker upper portion of the scar? I noticed that becoming darker over time as I was applying that pricier brand. I decided to stop applying altogether. It was actually only after my sister mentioned Contractubex again that I decided to buy a tube. I saw how well her scar is healing and my previous scar gel is proving to be spasmodic.

Above is the photo of my scar back in 2012 after I switched to Contractubex. I didn’t use flash when I took this photo to be as precise as possible.  Imagine if I used Contractubex from the day my wound dried up, I’m sure my shin would hardly have a trace of boo-boo by now. Oh well, that’s one lesson learned by this self-confessed klutz. 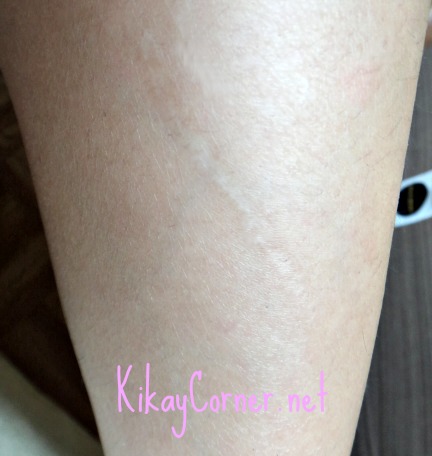 I have to admit, I was never religious in applying contractubex on the scar. Even my scaly skin can prove that I can get really lazy when it comes to applying anything on my skin, including lotion. Haha! Sure, at first I was determined to get that scar erased. But after four months, I only apply when I remember. My bad, I know. But considering the drastic improvement of my shin scar, anyone will understand why I will choose to recommend and vouch for Contractubex any day. 🙂

My ever reliable Contractubex tube. 🙂

In fact, I only remembered recently, that’s why I rummaged for my ever reliable Contractubex tube. Yes, I have been regularly applying at least once a day this past week. Apparently,  this wonder of a scar erasing tube also works its magic on old scar tissues.

While scars like mine might be nothing but brought upon by superficial klutziness, a handful of our loved ones and friends’ physical scars have a stories behind them. Although our body has this innate ability to heal itself, scars would often need assistance from reliable scar removing products like Contractubex. This product saved me from shelling out almost P16,000 (approx. $400) last year – the amount I was quoted to have to pay for laser resurfacing method of scar removal from one of our local and well known skin/derma clinics. But I was later told I cannot be a candidate because of the tendency  of my skin to be keloidal.

I am totally satisfied because Contractubex delivered not just better results as opposed to the former gel I used for my scar.  It is also my ONE HOPE  with the scars I still am to acquire through the years. There is peace in admission and acceptance. 🙂 Definitely making my being a klutz more manageable as it would otherwise seem. If you see me with inconspicuous scars despite all the bumps and bruises I have had – the credits is towards that humble of a tube that makes moving on from scars so much easier. 🙂